My Reflections on The Social Animal; the hidden sources of love, character, and achievement 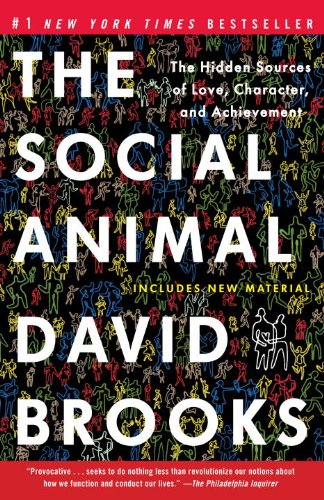 I like David Brooks. He’s humble, erudite self-effacing, real, and wise. You may know him if you watch the PBS News Hour or read the New York Times, The Weekly Standard, or The Atlantic Monthly. You may have read one or more of his earlier books. But even if it’s your first David Brooks experience, you will enjoy his latest book. It’s The Social Animal: the hidden sources of love, character, and achievement.

David Brooks creates a couple and tells their life story. The story begins before their parents meet and marry.  It continues as the boy and girl are born, grow up and fall in love. We follow the couple through their life. We witness their wins and losses, successes and failures, pain, scars, forgiveness, and reboundings. Their story ends when death parts them. On that narrative timeline Brooks loads relevant quotes from worthies and laboratories full of science.

I laughed as the young man met the young woman. He was vaguely aware of why he found her attractive. Brooks describes how biochemistry kicked in unconsciously for both. As he tells the story, Brooks slowly and persistently makes his case for the power of the unconscious.  He sprinkles the text with reflective gems and summaries of neurological research. He wove a three-stranded cord to make the case that our unconscious decides and then lets the conscious discover the choice and take credit for it.

I’m a choice architect in my day job. I nudge adults toward the financial choices they tell me they want to make. I read a fair bit about decision-making, thinking, and how smart people make dumb mistakes. Because I’ve previously wandered in this field, I knew of many of the cited studies. David Brooks often added an extra dimension or a different perspective.

David Brooks simplifies complex material so busy adults can understand it. The Social Animal provides clues about how life works, even though the conscious mind may tell us to ignore the little man behind the curtain.

Forces in our culture make outrageous claims about what we do and can control. Brooks admires and respects epistemological humility. He shows us we don’t know as much about how we know things as we think we do.

In Butch Cassidy and the Sundance Kid, the world’s best bounty hunters are closing in. Butch and Sundance have this exchange.

Sundance: “Those guys aren’t as tough as they think they are,”

Butch: “That’s right Kid, and neither are we.”

May you enjoy Brooks’ book. It will be well worth your time and attention.

What wonderful books have you read lately?

Terry Moore, CCIM, is the author of Building Legacy Wealth: How to Build Wealth and Live a Life Worth Imitating. Read his “Welcome to My Blog.“

You have Successfully Subscribed!