Getting to the Top

Why would a businessman almost 60, whose only sport had been tournament chess, decide to climb Kilimanjaro, 19,863 feet, the highest peak in Africa? Here’s the story.

Rick, my best male friend, got me hooked on ocean kayaking. Over several years we had kayaked in Baja California, Canada, the Channel Islands, and the Bahamas. At my work a young man in his prime, about 4 inches taller and with about 50% more muscle mass, nicknamed me “the outdoor guy.”

My two kayaking buddies, both over 50, roared with laughter about that nickname. We three sometimes jokingly referred to each other as “manly men”. Many of our friends and peers were amazed that would we would take such outrageous risks… travel by car to Baja, leave the vehicle for a week and then go into the 100-mile-long bay within a mile of the ocean … without a guide or a gun!

Were we crazy or just fools?

Candidly, our adventures were pretty tame. We ate street tacos and spent some nights camping on desert islands, but nothing close to Jason Bourne. We were just enough outside everyone else’s norm to consider ourselves mildly adventurous.

Then one day Rick called: “I’m going to climb Mount Kilimanjaro. Do you want to come?”

I’d never even considered such a fool idea. But soon I was exploring the Internet. The second story was about a fellow my age who died at the top of Kilimanjaro! I called Rick, “We are too bloody old! What are you thinking?”

He responded, “OK, you don’t want to go. You’re fine fellow. I wanted you to have the option. Have a great summer.”

Rick introduced me to the San Diego trip organizer, a woman who summitted Kilimanjaro seven times. She LOVED the mountain and the country. She would guide me.

I increased my swimming and began months of weight training, working up to 25% more than I ever lifted before. There was running, weight training, treadmills, biking, stretching, work on a rowing machine, and swimming. 75% of the time was cardio.

The most strenuous cardiovascular regimen required pushing my heart rate up to 150 beats per minute. Treadmill display reported I was in redline and should stop. NOW. I kept it up for five minutes. My resting heart rate was just under 50 bpm. Whew, what a nut I was. Nobody in that gym had the same vision. Where was Rick now?

A younger, stronger friend was also training for a similar trip. After about three months his doc told my friend that his weight and heart condition kept him from getting the medical clearance. His trip was over before the airport.

Our trip organizer invited ten people on a series of hikes of ever-increasing intensity. We climbed the highest mountain in the county. Three weeks later we went two hours further to do the hardest half of a one about 50% higher.

I was the oldest person and was faster than my wife who was not going to Kilimanjaro, but we were slower than all the younger folk. A month later a younger, taller fellow and I scrambled up a taller, steeper peak, at one point having to run up about 75 yards of loose pebbles, “scree”, to gain about 50 yards of elevation. The pebbles slid down with us or against us.

Please understand I’m not complaining. Almost everything about the training was new to me. I was not even a weekend warrior; I had done one half marathon 25 years earlier. This physical discipline is routine for Marines and college athletes. I was a-59-year-old rookie, trying to do it without a training partner.

The last US training hike was to be Mount Whitney. During the week before the hike, I developed a cough that got worse and I went see my MD. His diagnosis was bronchitis. I asked him about Mount Whitney. He reckoned I could probably “bag the top” but advised against it. I accepted his counsel.

My buddy, Rick, topped Mount Whitney and then did a mission trip to the Andes. He had two weeks at about 16,000′ in the three weeks before seeing Kilimanjaro. By the time I left San Diego I was in my best shape since high school more than 40 years earlier, maybe better.

The first day of our climb began at 5,000 ‘ as we hiked through rain forest. We called our guides “sherpas,” even though they weren’t members of that legendary ethnic group. And I learned that people who have climbed Mount. Kilimanjaro often refer to it, affectionately, as “Kili.”

By the end of the second day we were above the clouds and stayed above them for five days. On the fourth day I told the head guide that I never give up and I always finish what I start, but they should send me back down the next day with a sherpa because I couldn’t continue. He smiled, said he understood, but asked me to go on one more day because the path down was rotten at that point. That guide’s clever deflection meant I summited. 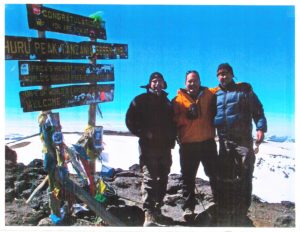 On the summit day, I was completely exhausted. I could see the peak about a mile away, but I was spent. One of the guides told me to lean my head into his back and follow him the last bit. My legs felt like elephant limbs, but I followed him to the monument sign. That’s the one with the prayer ribbons and the markers which tell how far to 30 international cities. Can you imagine being too tired and too cold to take your hat off for a photo?

Once, Kili was Earth’s highest peak, taller than Everest. It was a volcano that blew its top and spewed debris for thousands of miles. That eruption left a flat area just below the rim of the former volcano, called a “caldera.”

Most Kili trips involve getting up before 0 dark 30 and hiking up, summiting near dawn and then heading down. Our trip leader made other arrangements. After the summit we had special permits to spend the night on the top, in the caldera.

I was chilled all night wearing everything I brought, inside the sleeping bag, which had been to Mount Everest base camp earlier that year with another friend. My spirit was willing, but my body was too weak to amble an extra 200 yards to photo document me, the ant, in front of Kili’s 150-foot-tall glacier.

That night the organizers sent Rick down the mountain because of his sleep apnea. He walked down with sherpa in the full moon. They descended 5000 feet before the rest of us had breakfast. The organizers didn’t want to Rick to wake up dead in the caldera.

The Tanzanian government and the guides don’t report how many tourists die each year. We saw one fellow, on a stretcher with four tricycle wheels who was being bounced down the trail by four sprinting sherpas. We never learned if he survived.

The trip was the hardest physical thing I’ve ever done. Most days the sherpas were close to force feeding us. We ate five meals and had snacks almost every hour. Even though I was consuming nearly 5000 calories I lost over five pounds of muscle and more fat in eight days. All of us suffered some degree of altitude sickness. It was amazing to me that I lost my appetite for ALL types of food.

I’m glad I went but it was not because the mountain was spectacular. Five nights of seeing thousands of stars in cloudless skies was pretty amazing, but the sky was not the payoff.

Instead I’m glad I made the trip because it showed me what I could do. A friend explained that to know your limits, you must to test your limits. Kili tested my limits. I learned they were wider than I realized, and totally real.

In the past I had often stopped various things because I was tired or bored or because I wanted to do something else. On Kili when I stopped it was because I couldn’t do any more. It was frequently after I had done more than I wanted, after I hurt, and after I was bored.

I believe that most worthwhile things that are hard. JFK said we choose to do important challenging things “not because they are easy, but because they are hard.” Many things in life seem like immense hurdles before we master them. But after you conquer them, they’re more like appropriate stepping stones.

Discipline is remembering who you are. Our self-identity shapes what we do, who we associate with and who and what we decline. Kili changed my identity, which in turn brought me closer to people and opportunities I would have not seen, recognized or been drawn to. At least as important, Kili brought me to the attention of folks I would not have sought out.

Kili earned me membership into a society of adventurers. Because of that 50-mile hike, people reached out to or engaged me. Like Robert Frost I took the road less traveled and it made far more difference than I could have ever imagined.

Terry Moore, CCIM, is the author of Building Legacy Wealth: How to Build Wealth and Live a Life Worth Imitating. Read his “Welcome to My Blog.“

You have Successfully Subscribed!